What Martin Luther King Jr. taught us about leadership and loneliness 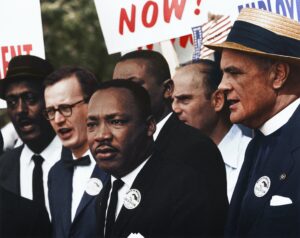 On the third Monday of every year, communities around the United States share a unified moment of reflection on the life and accomplishments of Reverend Dr. Martin Luther King Jr. We gather, celebrate, and volunteer in an effort to recognize not just the impact that he had on our shared history, but on the legacy he left behind as a civil rights icon, leader, and community organizer.

What we are often presented with, however, is a version of a man that is more platitudes than person. The unfortunate reality is that when we memorialize a narrow, perfect version of a person, we ignore the many intricacies and nuances that often make them the charismatic leader that they are. Moreover, as it relates to historical Black figureheads like Dr. King, when we see only their accomplishments, we lose the opportunity to be inspired by their individual perseverance as a human being, as well as the village it takes to overcome them.

Since he became a public figure in 1955, Dr. Martin Luther King Jr. has been studied both as a person and as a revered leader. Rarely, though, do we pause and consider how the weight of that title of leader, and the associated responsibilities, affected his wellness.

1. Make no assumptions about the strength of a person in leadership:

Though there were never any formal diagnoses for the Reverend Dr. King, it is understood historically that he had many struggles with mental health, particularly with depression. One of the most prominent reflections on this is a less-frequently shared quote about his wellness in 1959, used in Nassir Ghaemi’s “A First Rate Madness: Uncovering the Links Between Leadership and Mental Illness” 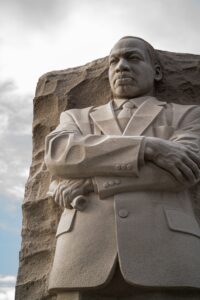 Despite the figure of composure that we remember, Dr. Martin Luther King Jr was, in fact, a human with emotions. There are reports from historians that Dr. King had serious bouts of depression as a child, as well as during his adulthood.  This could be in large part due to the tremendous weight that was constantly on King’s shoulders as a leader. The expectations of a nation, the wants and needs of your community, and his general calling to do the right thing.

However, the other side to public leadership also haunted Dr. King – near constant threats and perpetrated acts of violence against him and his family, harassment and surveillance from governmental entities, ongoing arrests, and ongoing public discourse about his humanity would take their toll on any person, let alone a leader. These facts are not presented to taint the image that we hold of him, but instead as a reminder that we never truly know the struggles that other people are facing. Even when they are seemingly filled with joy like tWitch, strength like Jason David Frank, laughter like Robin Williams, or leadership like Dr. King.

The version of Dr. Martin Luther King Jr. that is most often shared in classrooms and news broadcasts is one that was loved, respected, and heralded as the great unifier of races. While this is true in some ways, it is important that we remember that Dr. King was heavily surveilled by the American government for his “radical” ideology; in fact, in 1966, just three years after the March on Washington and two years before his assassination, a Gallup poll found that 63% of people viewed Dr. King as ‘unfavorable.’

He was described as a communist, a “messiah” of “Black Nationalist-Hate Groups,” and described by President Hoover as “the most notorious liar in the country.” So, to say that we have sanitized the experiences of Dr. King as a Black leader is an understatement.

The unfortunate reality is that many leaders with marginalized identities, particularly women, and especially Black women, still face much of the same barriers and intentional misrepresentations today. According to McKinsey & Company and LeanIn.org’s 2022 Women in the Workplace study, 47% of women with disabilities have had their judgement questioned, compared to 31% of all women and 24% of all men; LGBTQ-identified women and women with disabilities report higher instances of having their demeanor critiqued; and Black women and Latinas have the lowest levels of psychological safety in the workplace, as measured by concern about penalties for mistakes, ability to disagree with coworkers, and feelings of exclusion. All of these experiences contribute to feelings of isolation amongst leaders.

3. Leadership does not have to be lonely: 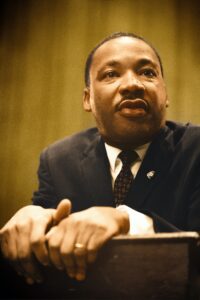 Being a strong leader requires a great deal of discipline, insight, and sacrifice – we are often reminded of the anecdote “it’s lonely at the top.” However, it is that very notion of inevitable isolation that often contributes to the isolation experienced by many in leadership. Of course, the issues that plagued Dr. King are both unique and universal; very few people will ever understand what he experienced, but many of the experiences are still occurring with leaders today. The lesson in Dr. King’s legacy is that leadership does not have to be lonely.

For example, Dr. King’s most famous address from the March on Washington could have been completely different if it weren’t for Mahalia Jackson. A musical legend, known as the Queen of Gospel and the “soundtrack to the civil rights movement,” Jackson was present on that day in 1963. When Dr. King started improvising, it was Mahalia Jackson that shouted “tell them about the dream, Martin! Tell them about the dream,” leading to the now infamous ad-lib speech known as “I Have a Dream.”

Most people know Coretta Scott King, Dr. King’s late widow, as just that, when in fact, Dr. King was inspired by her activism when they met, as she was more politically involved than him. These are two small examples of how the people in Dr. King’s life supported him in his work, but the message for leaders experiencing loneliness is that it does not have to be.

There are some components of leadership that we societally seem to have accepted to be a burden that is carried alone. Expecting that final decisions must be made independently, believing that leaders should shoulder their emotions, or even just the sentiment that leaders are supposed to be lonely all contribute to how people may become isolated. However, as we continue to explore new and different ways of accessing power, like shared leadership models, we gain a deeper understanding of the importance of caring for those that are called to lead. Finding strong mentors and coaches, addressing your relationship dynamics, and supporting your learning with peers are all ways to combat the loneliness that seems endemic of leadership.

As we honor Dr. King’s legacy, let’s be intentional with how we support those elevated into such prestigious roles. Here are some ways to take action this Martin Luther King Jr Day:

How to take action and make a change this Martin Luther King Jr. Day