Josh Cribbs, former Cleveland Browns wide receiver and founder of the TeamCribbs Foundation, sat down to reflect on his partnership with OhioGuidestone and his hope for the community. 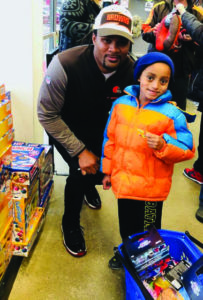 What was your first impression of OhioGuidestone?

I love how they’re committed to giving back to the community. It’s not easy to find an organization that is well organized in giving back. One thing I have a passion for is kids, and they do a lot for the kids. It’s not about me per se, it’s about being able to influence and to piggy back on organizations that do it the right way—it’s important for me, which is one reason I’m glad to be a part of OhioGuidestone.

How did you first get involved with OhioGuidestone and how long have you been partnering with us?

I don’t remember when exactly—I just know once I did, it never stopped. There was one event, I think I read to the kids, and then the next year it was even more. One event brought us out here and then once we saw what they were all about, then it was like “oh we can do this here,” “oh we can help out in this way”—again, to take it all from myself and piggy back on what other people are doing the right way is big for us. Before I even knew what OhioGuidestone was, before I knew about Stepstone Academy, I knew that they were doing big things in the community, not just how they’re funded or what their cause or mission is—knowing that they affect children was good enough for me. That was all I needed. 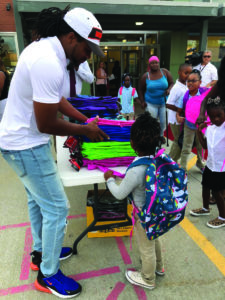 What are TeamCribbs Foundation’s values and your personal values? How do you feel they align with OhioGuidestone?

Most of all for the young kids. Seeing the community take care of itself. My foundation’s goal is no cause left behind. Seeing business leaders in Cleveland taking care of their own community is the biggest thing for us and my foundation, because I don’t just help kids, I help teens and adults, the police commission in Cleveland—but the kids are special. This is where it starts, so this is one aspect of my foundation that I love—helping out with the kids. Especially the first day of school. It gives them so much positivity going into their first day and it could affect their whole week and their whole year.

What are your hopes for the impact you can have in the community by partnering with OhioGuidestone?

At this rate, we’ll basically be like a committee and start to plan things ahead. How we can affect the parents more? It happens more at home. We were able to acquire a washer and dryer for them—that makes it easier for the parents. The book bags and the school supplies—that makes it easy for the parents. A lot of things we’re doing are proactive in order to help the parents, which inevitably helps the kids. When the parents are less stressed, the kids don’t have to feel the worry of their parents. I think that’s the biggest goal, allowing them to have success as children and be imaginative. The next step is taking that to the next level with the parents of these kids…because that inevitably helps the kids. If you can see what their foundation is and give them strong foundations at home, that affects the kids in a positive way.

What has been your proudest achievement working with OhioGuidestone thus far?

What has been your favorite event with the children at OhioGuidestone?

Our last interaction we threw a pizza party for the summer school program. I was able to bring my family, my daughter, my son and they were actually able to play with the kids and [the students were] able to see they’re regular just like everybody else. My wife was playing slide and paddy cake with the girls and they were giving her hugs. I was able to play catch with the kids.

That was a really good memory—to see my whole family being able to put smiles on the kids and the kids inherently put smiles on our faces—so it was a two-way street. They don’t see how it helps us—this alleviates stress for me. They don’t know how positively they affect us and that giving back helps us. Seeing my kids learn how to give back and see like, “oh, okay, my dad doesn’t play in the NFL and he’s still giving back,” that inherently passes the spirit of giving down to my children. So to see that and have that experience with them was one of my favorite memories with OhioGuidestone.

If you had to describe OhioGuidestone in one word, what would it be?

Community. Service. I think even though you could put those words together they can be separate. They’re in a community that they’re taking care of it. It’s a lot of selflessness that goes on—they’re not asking these parents for anything but they’re commitment to their own children and that’s the currency. I could say commitment would be another word. These are all positive things that are synonymous with giving back and community service.